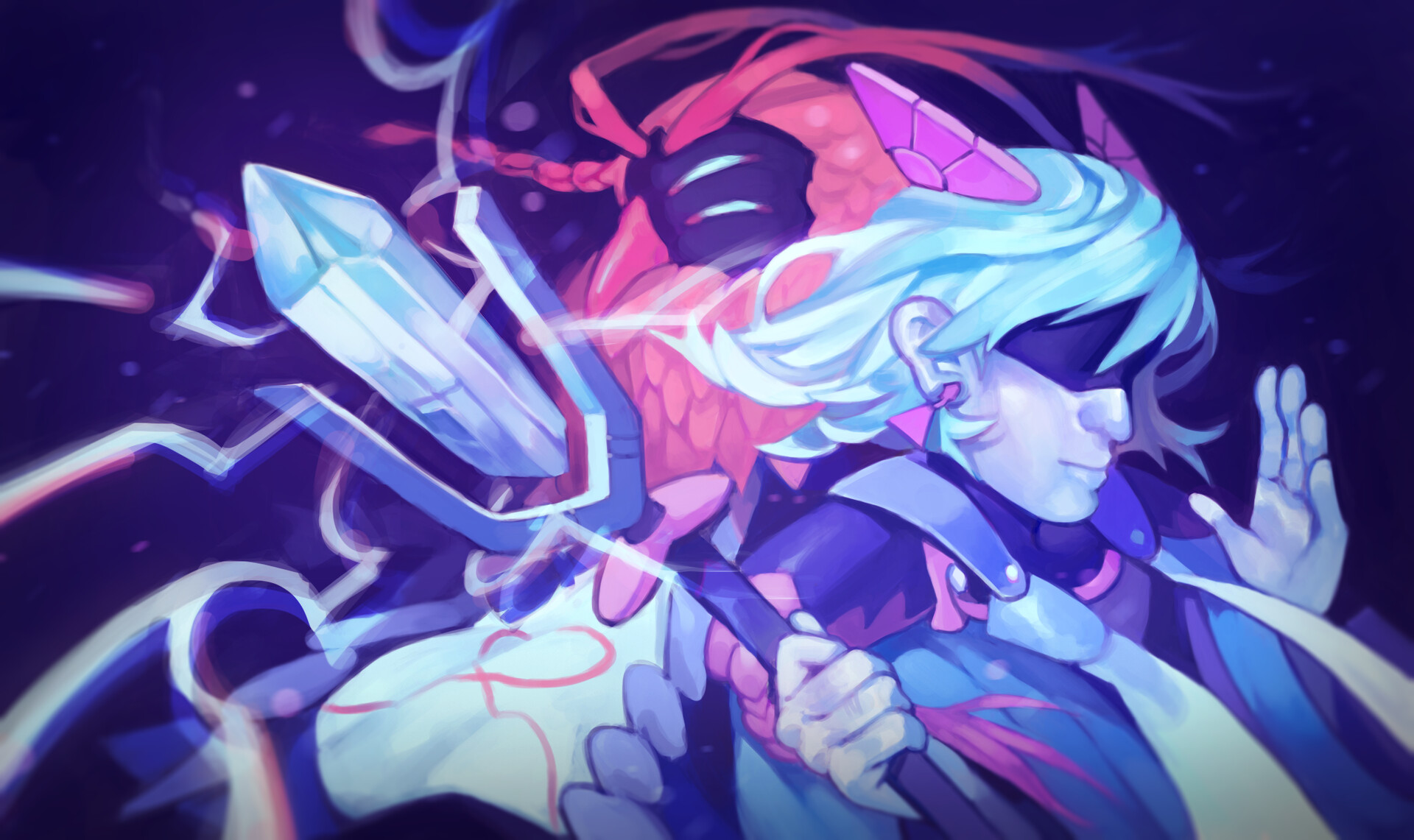 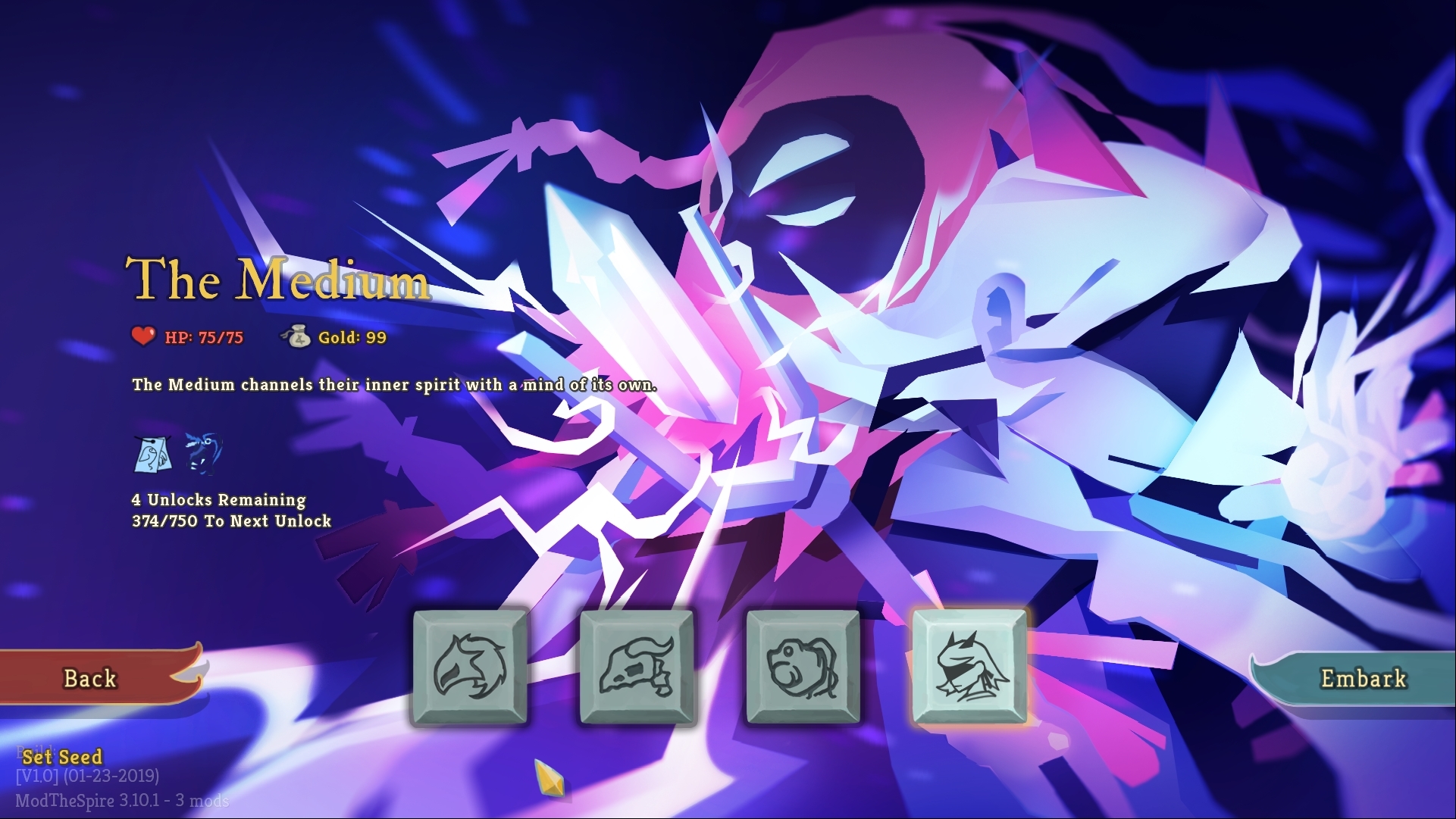 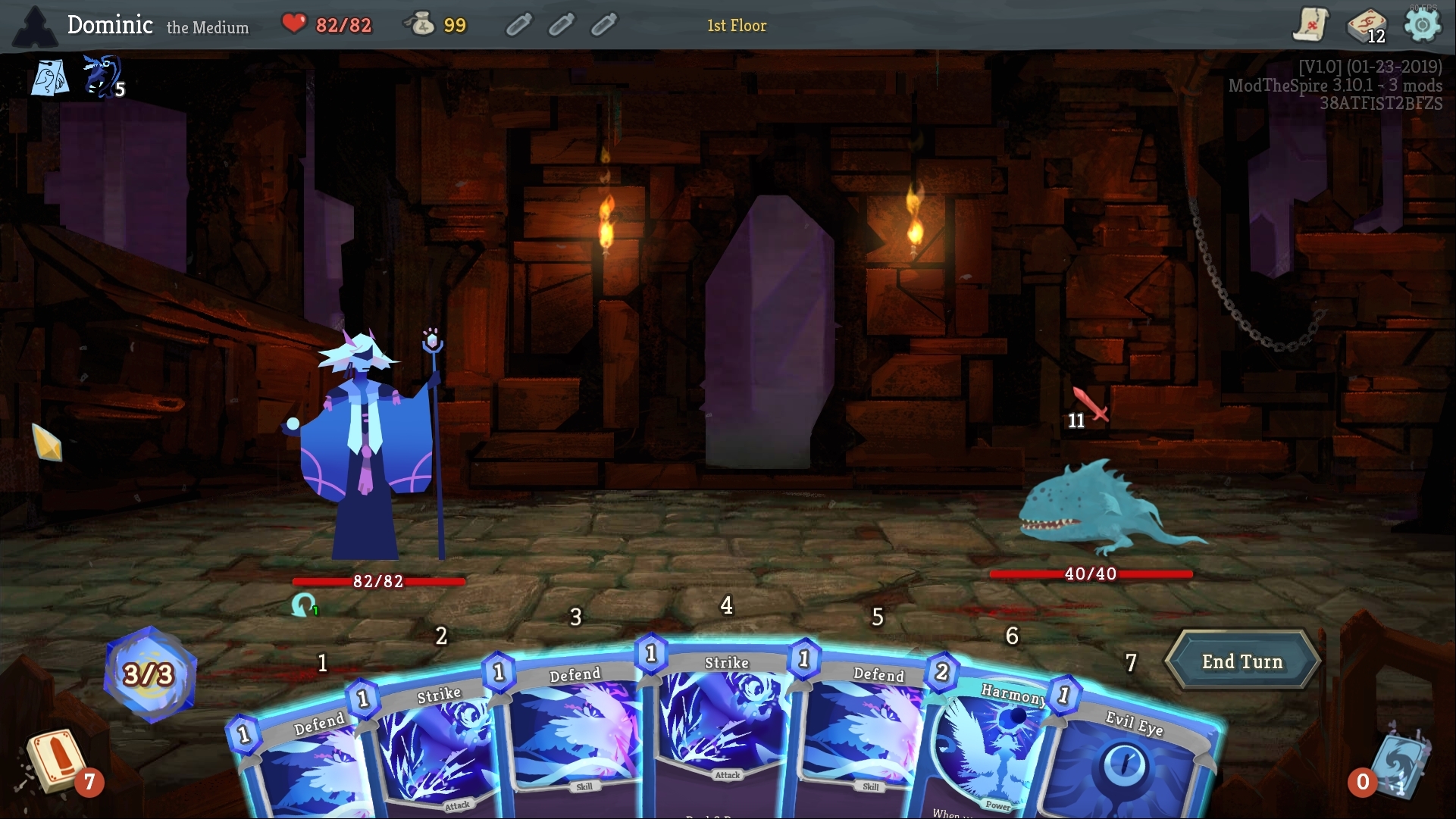 The Medium is a character mod for the game Slay the Spire, a roguelite deckbuilder. The medium has a form-switching mechanic that requires careful card sequencing in order to take advantage of each forms' strengths and mitigate their weaknesses. The goal was to enable the player to be flexible in deck building and playstyle by having many different deck archetypes including archetypes that rely on staying primarily in one form, fast form switching, or even other game mechanics that are under-explored in the base game like potions. This mod was a semester long project made with a team as part of Game Creation Society, a game development club at Carnegie Mellon University. I worked on card design and character mechanics. While the team and I were unable to finish implementing the mod before the deadline, the entirety of the character's cards and mechanics were designed and design process was an enlightening experience.

We started the design process by first writing down any ideas, themes, and mechanics we would associate with either of the two forms (with input from the rest of the team). This gave us a starting point for what kind of mechanics we might want to use for each form’s cards, as well as general themes that we could use for top down design. From there, we began to narrow down a small set of mechanics and themes we want to see for each form and began brainstorming deck archetypes and synergies built from those mechanics and themes. At this point, we also began to figure out how the form-switching itself would work. We wanted swapping forms to depend on the player’s actions and to incentivize careful card sequencing and planning. Our initial idea was to have the character switch forms when the player played a certain number of skill cards or attack cards, with playing skill cards switching to reason mode and playing attach cards to passion mode. In addition, we wanted the passion-based form to feel more powerful, but with less control, and the reason-based form to feel weak, but with more control. As a result, we decided each form would have a passive when the character was in that specific form. The initial idea for the passion-based form was to give it increased power and defense through additional strength and dexterity, but with the tradeoff of having attack targets randomized. The reason-based form was much hard to settle on an idea, as I thought that giving an extra card draw or energy would be too powerful. We eventually settled on having the character retain one card per turn, but as the project went on, it became apparent to me that the retain was not useful most of the time. However, we ended up not having the time to revisit this mechanic and design a better passive.

While we started designing some of the simpler, more basic cards, we also went to work fleshing out the entirety of the deck archetypes and synergies for the character. Unfortunately, the programmers were only able to implement some of the cards designed, so we were unable to actually test the cards in-game. As a result, I believe a good portion of the cards designed are unbalanced or may synergize or interact in unintended ways. In one example, a card that was implemented that stunned an enemy ended up being too strong in practice and was only apparent once someone playtested the character. In the end, the mod was overscoped for the typical semester long project done in the club. While I was willing to continue to develop and refine the mod over summer break, it was difficult to keep other members of the team together and motivated, so the mod was ultimately left unfinished.